As I admitted in the review of my last visit to Jamie’s Italian i’m a huge Jamie Oliver fan. I buy all his books, watch all of his shows and have had some great times in his various restaurants including Jamie’s Italian Manchester shortly after it opened.

Unfortunately, this Christmas Eve I was reminded that Jamie’s Italian isn’t really a Jamie Oliver restaurant, it’s just a chain restaurant. I also remembered why I really don’t like chain restaurants.

Jamie’s Italian Manchester is still a very impressive building in the old Midland Bank on King Street and it was looking particularly festive this time too.

When we arrived the restaurant was completely packed and we were whisked up the stairs to seemingly the only empty table in the place, so they’re clearly pleasing the general public anyway. Within seconds of being seated we were presented with a glass of Prosecco, an excellent start.

We really enjoyed our plank in April but this time it was a little underwhelming. It didn’t seem to have been presented as carefully and the quality of the ingredients has decreased significantly in my opinion. There were some highlights, the olives, pickles, mozzarella and salami were all very good but others were disappointing including the vegetables which were cold (intentionally but didn’t really work for me) and overcooked (presumably not intentionally). The bread was also nowhere near as good as last time. 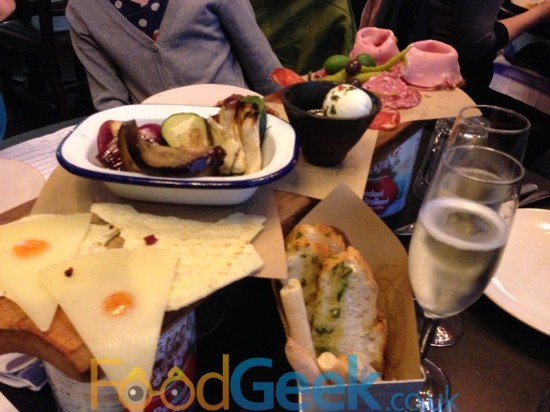 Our main courses arrived and looked a little better at first glance. I’d ordered ‘Roasted Sea Bass Acqua Pazza’ which was a whole roasted sea bass with olives, garlic, wine, capers, parsley & tomatoes. The fish was cooked OK, the flesh nice and moist but the skin was soggy on one side which was a shame. The olives and capers were good, the tomatoes were described as ‘the sweetest baby plum tomatoes’ on the menu. I’m quite sure that they weren’t plum tomatoes, i’m certain that they weren’t ‘the sweetest’. Overall the dish was alright but fairly unremarkable. 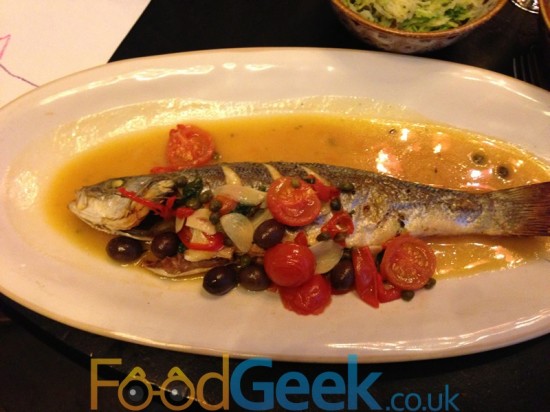 Mrs FG had ‘Baked Pumpkin & Squash Gnocchi’ which was severely under seasoned but after a good shake of salt and grind of pepper was actually a nice dish. The baked pumpkin was excellent, the sauce had a deep squash flavour and the rosemary and crispy sage were delicious. The ricotta was very creamy and worked nicely. 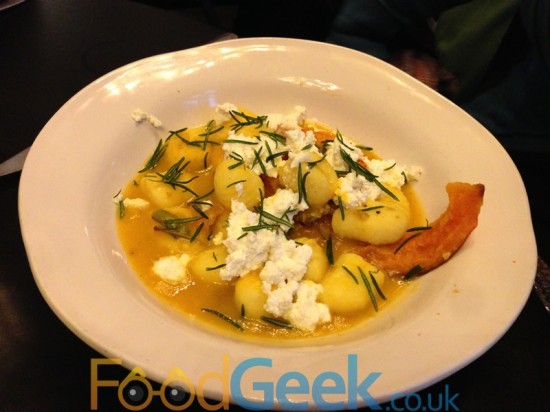 The main courses were served with sides of ‘delicious crispy polenta chips, seasonal vegetables & slow-braised Tuscan beans’ (the words of the menu, not mine). The polenta chips were indeed delicious, crispy on the outside and soft and light inside, topped with rosemary and grated parmesan they were tasty and very moreish.

The Tuscan Beans were not actually beans, at least I don’t think that they were. I’m almost certain that they were chickpeas. Either way they were very nice, well cooked in a spicy tomato sauce.

The ‘Seasonal vegetables’ were less successful however. The waitress claimed that they were sprouts but they tasted like cabbage to us, very bland cabbage at that. Again they were totally under seasoned, thankfully that was easily fixed. Unfortunately we couldn’t do anything about them being overcooked though, they were a bit mushy and quite watery. 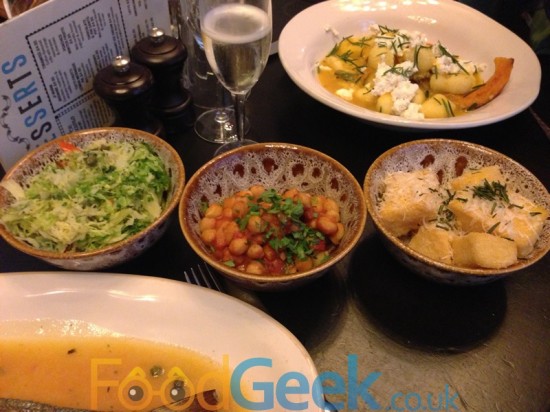 From the mixed bag of main courses onto more disappointment with the desserts. On our last trip here we loved the Panna cotta and Lemon Curd Slice so I was really looking forward to the Christmas deserts. I ordered ‘Christmas Tiramisu with mascarpone & Limoncello’. What I received was a small, tatty piece of cake that looked like it had been chewed by a dog, topped with quite disgusting, sticky, sweet and sour slices of lemon. The cake itself was actually quite nice with the soft layers of mascarpone, I couldn’t detect any Limoncello however, unless it was in the candied lemons of course as they were inedible. I think the dessert had been frozen and not properly defrosted as it was really cold in places and I could almost feel ice crystals. Overall it was very disappointing. 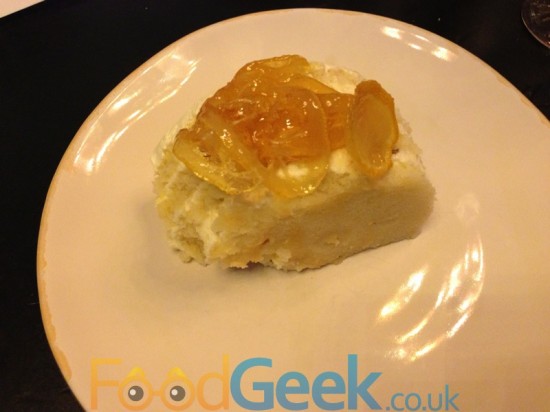 Mrs FG’s dessert was another example of misleading menu descriptions. It said ‘Chocolate & Pistachio Tart
With scrumptious baked figs & creamy Yeo Valley natural yoghurt’. The Chocolate & Pistachio tart was quite nice to be fair, perhaps a little heavy but it had deep chocolaty flavour and the pistachios added a nice nutty contrast and crunch. The fig (singular, not plural as described) was a disaster. It was not ‘baked’ and certainly not ‘scrumptious’, it was raw, grainy, cold and not at all appetising. The yoghurt was overpowering and I think cream or ice cream would have been a much better choice. 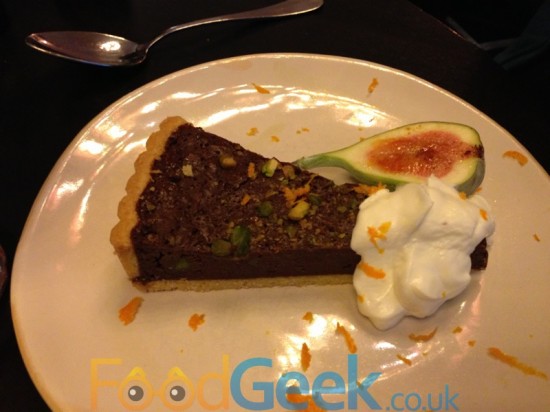 Finally we were served 2 mince pies on a wooden board. These were not any old mince pies though, these were ‘Jamie & Gennaro’s Amazing Christmas Peppered Mince Pies’. Yet more evidence that the people marketing the food are better than those cooking it. They were not amazing, not even that good really. I couldn’t taste any pepper at all and the ratio of mincemeat to pastry was far too low, the layers of crispy filo pastry were nice but there was far too much of it and not enough mincemeat. They also looked a bit shabby. 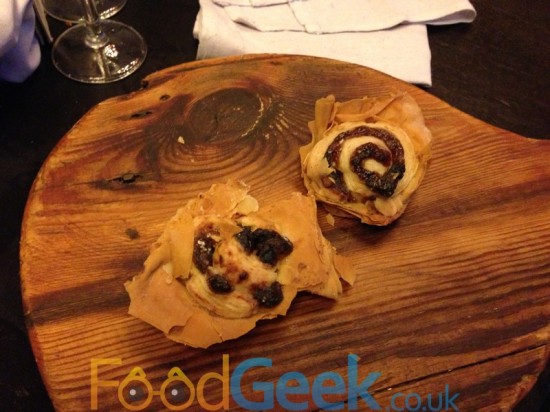 Service was fast and efficient, the staff were friendly but they seemed rushed and weren’t particularly attentive.

All in all it was generally a disappointing visit. It wasn’t terrible but it was certainly much worse than my last visit here and no better than any average Italian chain restaurant of which there are many in Manchester. It’s not even close to the quality of food being served at Italia for very similar prices. I think it’s probably partly because it was Christmas Eve and very busy but that’s not an acceptable excuse, especially when working from a limited set menu.

I get the feeling that they’re living on the Jamie Oliver name to stay so busy, but that name is what made me expect better and left me disappointed.

Follow @FoodGeekUK
As I admitted in the review of my last visit to Jamie’s Italian i’m a huge Jamie Oliver fan. I buy all his books, watch all of his shows and have had some great times in his various restaurants including Jamie’s Italian Manchester shortly after it opened. Unfortunately, this Christmas Eve I was reminded that ...