Last Monday one of my favourite Manchester restaurants SoLita launched their new lunch menu, on paper it looked like fantastic value so I paid them a visit to find out.

The menu is available on weekdays  and currently contains 11 items priced at £5.95 each as well as Fries (£1.50) and Sweet Potato Fries (£2.50). I’ve no doubt that this will change over the coming weeks as they tweak and refine the menu and dishes though.

I had intended on trying most of the new lunch menu but first had to experience a very special sounding burger, The Manc-Hattan, a Manchester take on the famous Manhattan style beef sandwiches.

SoLita’s burger version contains their regular 6oz chuck steak pattie on an oven bottom muffin topped with pastrami, deep fried black pudding, Lancashire cheese, mustard and Lancashire sauce. It may sound slightly odd and to be honest, it looks a bit strange too but I can assure you that it tastes delicious. I’ve enjoyed many burgers at SoLita but this is right up there with the best and it’s certainly the most interesting. I’ve always loved oven bottom muffins and it left me feeling slightly nostalgic and evoked childhood memories of sausage & egg muffins with loads of melted cheese on Sunday mornings, it worked really well in the context of this burger too and was a nice change from the usual brioche buns.

The flavour combination of pastrami, melted Lancashire cheese, black pudding and mustard was fascinating and somehow really worked, it tastes fantastic. The black pudding had been coated in Panko breadcrumbs and deep fried which gave a great crunchy texture but was soft and crumbly inside. Lancashire cheese is severely underused in general and I certainly don’t remember ever seeing it on a burger which is a shame as it worked brilliantly. All in all it’s one of the most exciting burgers I’ve eaten for a long time, I don’t think it will make it onto the main menu so try it while you can! 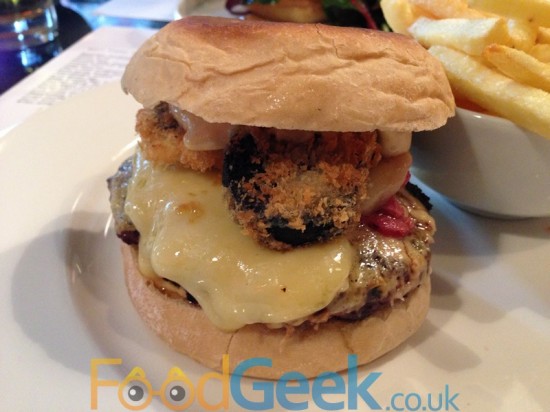 As well as the Manc-Hattan there was another special that I was keen to try before it disappeared into SoLita folklore, ‘Deep Fried Dauphinoise’. I’m a huge fan of the already artery clogging dauphinoise potatoes so was naturally intrigued to know whether they could be improved by being coated in breadcrumbs and deep fried. As it turns out I don’t think they are improved as the process completely changes them but they were very good in their own right.

Firstly they’re bite size and handheld which is always a good thing. Biting into them to find layers of soft creamy potatoes with all the flavour of dauphinoise was a joy but whilst the breadcrumbs add a unique crispy texture of their own, for me the best part of traditional dauphinoise is the crunchy, golden brown topping which is obviously lost when cooked this way. 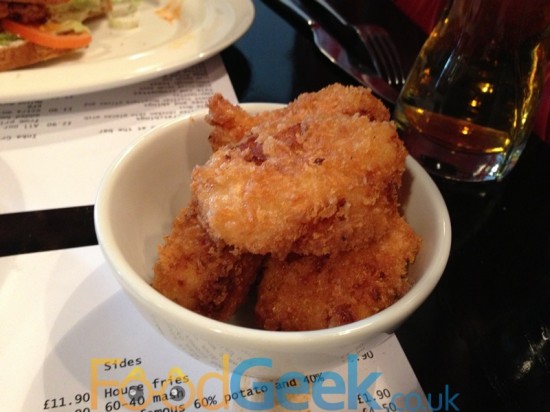 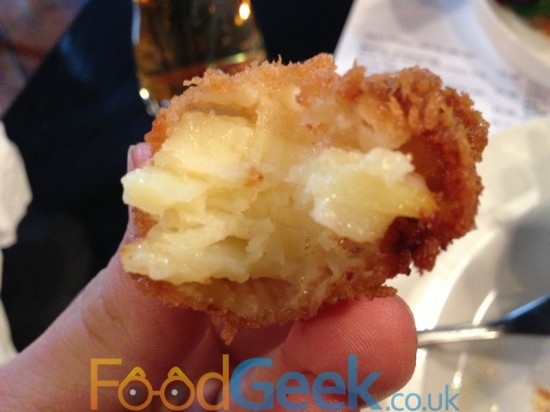 So we had arrived at SoLita with the intention of trying at least half of the new lunch menu but the Manc-Hattan and Dauphinoise had taken their toll and we could only manage 3 of them. The first choice was easy, ‘Nduja spiced Boston baked beans’. I’m still enjoying my Nduja honeymoon period and can’t get enough of the stuff so this was a no brainer. Slow cooked haricot beans in a rich tomato sauce with bacon and spicy Nduja sausage served on top of 2 slices of sourdough toast. The beans were very soft and the sauce lovely and comforting, I felt it could have done with a touch more heat as Nduja is powerful stuff and it felt a little toned down but it was very nice all the same. 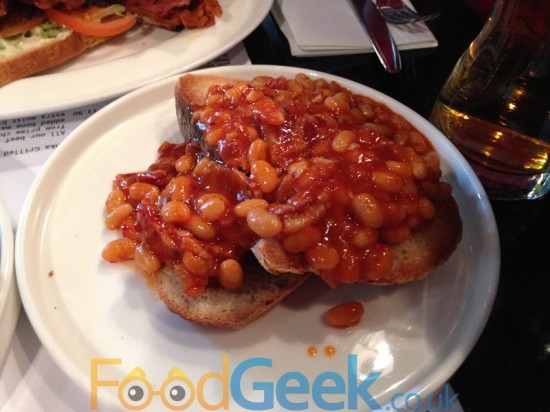 The next dish we tried was KFBLT, a take on the traditional BLT but using Kentucky Fried Bacon as seen on their gorgeous KFB burger. It was really tasty, KFB is amazing stuff so it would be difficult not to taste good. It didn’t need much else with it, the simple accompaniment of lettuce, tomato and mayo was enough. Although, personally I think I’d have preferred it on soft bread rather than toast as the extra crunch took away from the texture of the KFB slightly. 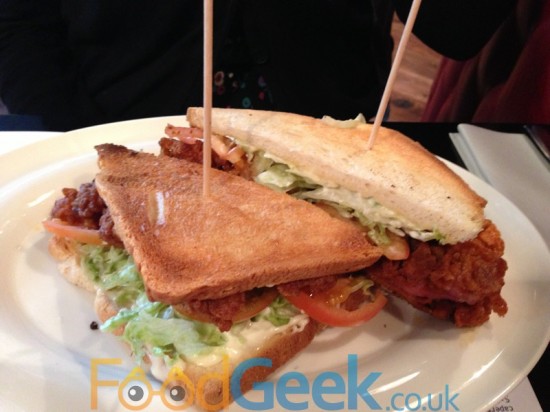 For our final choice we were torn between items such as ‘Philly steak sandwich’, ‘Meatball sub’ & especially ‘Pulled pork cheese toastie’. All sound and look fantastic but since we were getting full we thought a slightly lighter option would be sensible so went for ‘Home cured gravlax and cream cheese on brioche bun’. The salmon has been home cured with vodka and was phenomenal quality and absolutely perfect texture. It was paired beautifully with fresh dill and a mustard and dill dressing. The only thing I didn’t think worked was serving on a brioche bun, or at least not on this particular brioche bun. The lid was too big and just contained a bit too much bread. In the preliminary version of the lunch menu there was a choice between brioche bun or bagel, I think bagel would work better or at least a smaller bun. It’s a shame that the salmon isn’t allowed to shine when it’s such good quality. 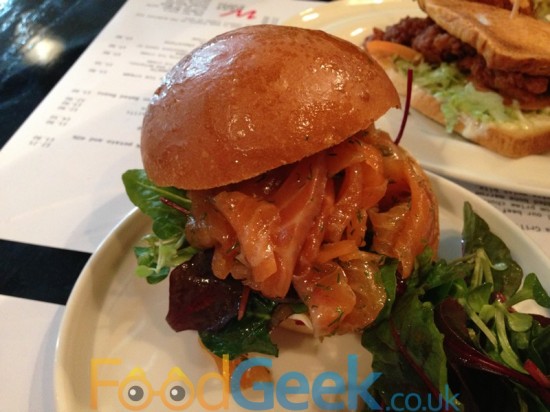 Despite being very full by this point another special on the board caught our eye, this time a dessert I’ve heard a lot about but never actually tried, S’More. As far as I understand it’s a traditional American/Canadian dessert commonly eaten around campfires. I’ve seen many photos of them but never seen 2 identical versions so it seems they’re up for interpretation. SoLita’s version was essentially a chocolate chop cookie topped with delicious chocolate ice cream, marshmallows and cherry sauce. I can’t say it blew my mind but who doesn’t like cookies & ice cream topped with sweet things? 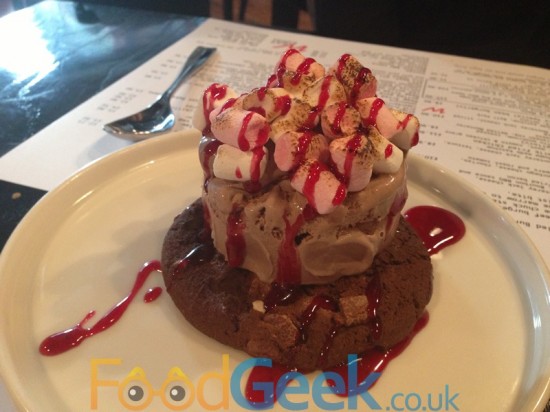 This trip didn’t really turn out to be a sampling of the lunch menu as we were distracted by the always interesting specials board. I will definitely return soon much more focused to try the rest of the lunch menu, I must have a Pulled Pork Cheese Toastie in my life very soon! Everything we did try was mostly good and the restaurant was the busiest I’ve ever seen it at lunch time so it has clearly had an immediate impact. Understandable as it is certainly fantastic value at £5.95.

Shortly after this post I returned to SoLita for their epic Apocalypse Now (And Later) burger. Whilst there I managed to squeeze in another 3 items from the lunch menu as well as a new side.

Firstly a rather large ‘Meatball Sub’. Not quite a Subway footlong but pretty hefty and much tastier. A soft brioche sub roll filled with good quality meatballs and a rich ‘marinara’ sauce, topped with melted cheese was delicious. 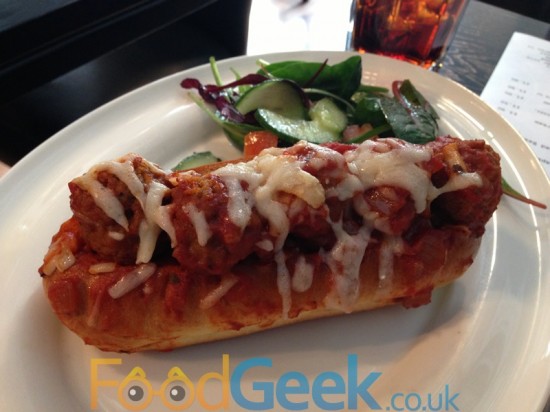 Next was one of the lunch items i’d been looking forward to the most, ‘Pulled Pork Cheese Toastie’. Who doesn’t love a good cheese toastie? What could be better than one filled with the same 24 hour slow cooked pulled pork from the infamous SoLita Pulled Pork Sundae. Not much, it was great. Packed with juicy pork and stringy melted Monterey Jack cheese it was hearty, filling and delicious. 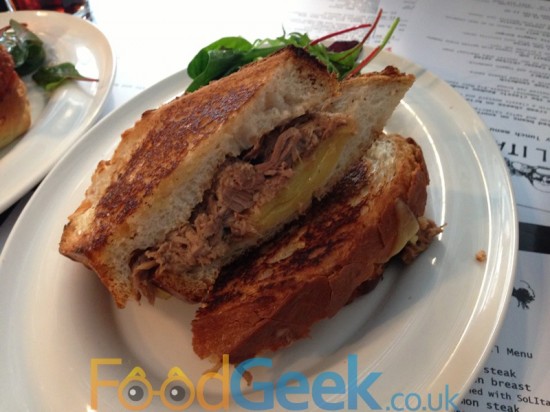 The last item was a ‘Philly steak sandwich’ which was unfortunately quite disappointing. The only weak point from the lunch menu that i’ve tasted so far and in fact probably the only disappointing thing i’ve ever eaten at SoLita, so I won’t hold it against them. The thinly sliced steak was decent quality and cooked well but the bun was very dry and tasted stale, there was also very little of the melted cheese sauce which left a dry, bready and rather bland sandwich.

There’s every chance that I just caught this Philly on a bad day, it was probably only a fresher bread roll and extra dollop of cheese sauce away from being good. 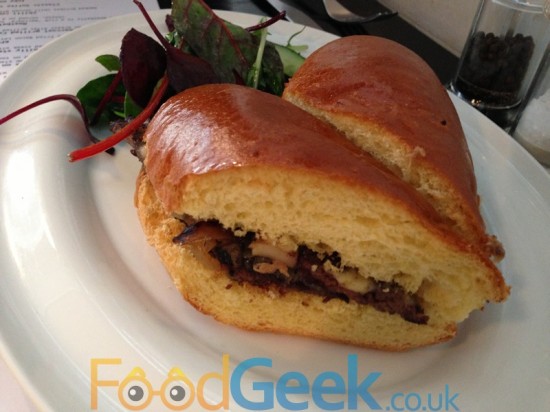 I love pickles, especially when they’re coated in batter and deep fried like they are at Southern Eleven. They even finished in 3rd place for ‘Best Side/Snack’ in The Food Geek Awards 2012 so I was very pleased to see them appear on the menu at SoLita.

There are a couple of key differences between them though, at Southern Eleven they’re ‘pickle spears’ – whole, fairly small pickles and are coated in a light tempura type batter whereas SoLita’s are quite thin slices and coated in breadcrumbs.

I think overall I just about prefer the Southern Eleven version, i’m not sure if it’s because they’re whole, I suspect that it’s the batter I prefer over breadcrumbs. That’s not so say the SoLita version aren’t very good in their own right, they are and a bargain too. 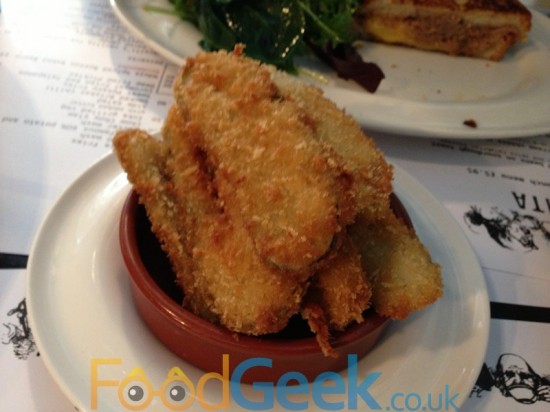 Follow @FoodGeekUK
Last Monday one of my favourite Manchester restaurants SoLita launched their new lunch menu, on paper it looked like fantastic value so I paid them a visit to find out. The menu is available on weekdays  and currently contains 11 items priced at £5.95 each as well as Fries (£1.50) and Sweet Potato Fries (£2.50). I’ve ...