Guerrilla Eats At The Beagle Opening Night. Street Food, In A Pub!

I’m pretty sure that I don’t actually have OCD and probably shouldn’t joke about it as I realise it’s a serious illness. I do have some slight ‘OCD like’ tendencies though such as needing to keep things organised, I’ve spent many hours arranging DVD and CD collections into the ‘right’ order and the same applies to the reviews on this blog. Every single one of them has been published in the order that I visited the restaurants, even if I visited several on one day they’re in the order I went on the day! Until now. Such is my dedication to the cause, I decided to do something I’ve never done before and get my review of Guerrilla Eats at The Beagle up before my backlog of 9 London posts from last weekend are finished.

When I heard that Guerrilla Eats was to take over the food at The Beagle in Chorlton I was genuinely excited as I’d had a great time at their King Street takeover just a few weeks ago. That excitement was tempered slightly by the realisation that I’d never get to try the original food at The Beagle which I’d heard great things about and was planning on visiting at some point. I soon got over it though when Guerrilla Eats founder and fellow local foodie/blogger Sarah invited me to the launch night and promised free food and drinks. Also, I totally respect The Beagle’s decision to want to focus on being a great pub with good drinks and not worrying about providing decent food.

Sarah must know somebody in the weather department as just like the last event it was gloriously sunny with not a cloud in the sky. We arrived at The Beagle slightly late after somehow managing to get on the wrong train, the place was packed and absolutely rocking already! The plan is for Guerrilla Eat’s stable of traders to host alternating services at The Beagle, offering a selection of street food inspired dishes. For the opening night they had foragers and lovers of fine food ‘The Moocher’, ‘The Roaming Pinchos’ with their street food take on Spanish tapas and the amusingly named Margo & Rita serving exciting sounding Mexican street food.

Each of the traders were offering a small number of dishes, regular readers will know that I’m greedy and also indecisive, a combination which usually leads to me wanting everything. But not wishing to be cheeky or abuse Sarah’s generosity I managed to restrict my order to 5 dishes. 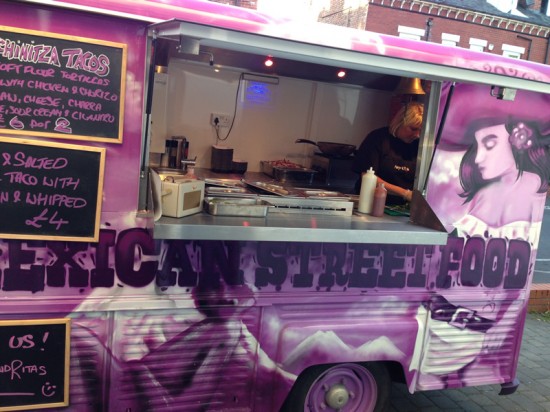 Firstly from Margo & Rita ‘Chicken & Chorizo Tacos’ and ‘Veggie Tacos’. Both were served in soft flour tacos and filled with gorgeous ingredients including a fresh lime slaw, chilli sauce, sour cream and coriander. They were fresh, vibrant and delicious. I enjoyed them both but the chorizo just gave the non-veggie version the edge. 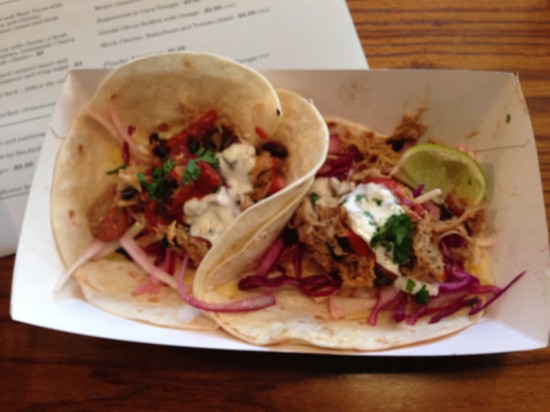 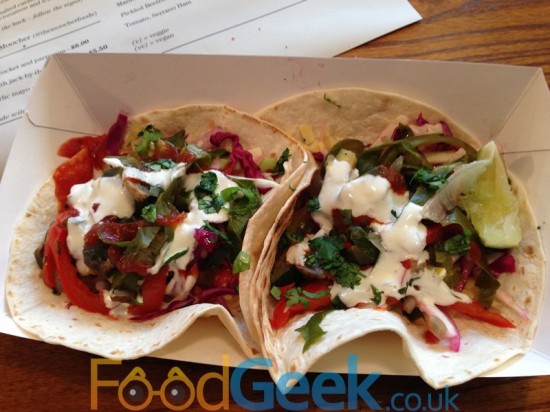 Next up was food from The Moocher, from whom I’d enjoyed a gorgeous BBQd pork belly sandwich at the King Street event so this time I went for ‘Cured Venison loin’ and ‘Veal Steak’. Both were served on homemade wildflower bread which was fantastic, I’d have been perfectly happy with a few slices of that on it’s own! 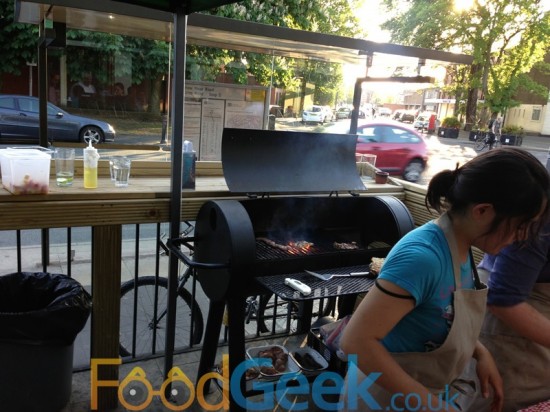 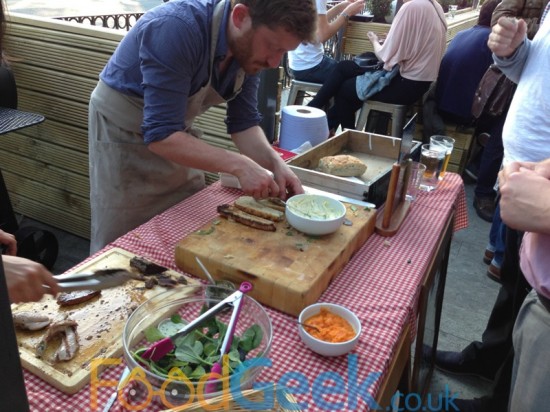 The venison was great quality, delicately cured and full of flavour which complemented the rocket & parmesan brilliantly, a winning combination, especially on that gorgeous bread. 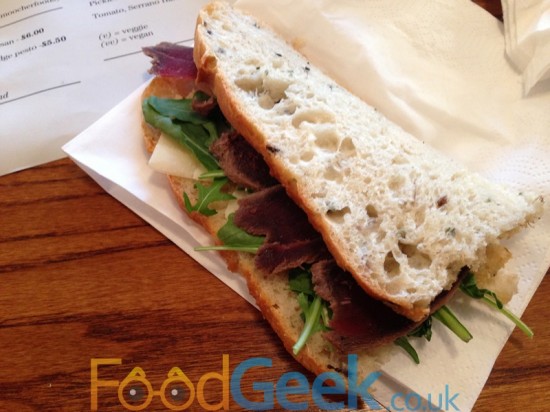 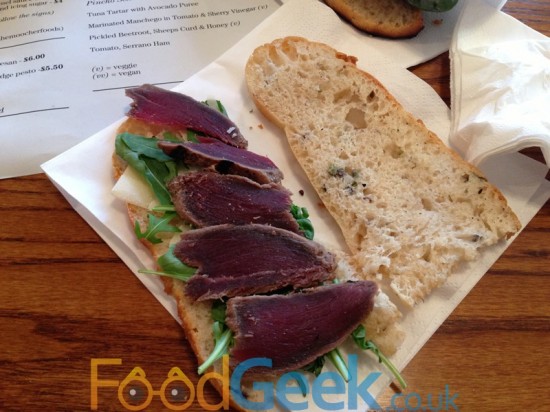 The Veal steak was equally good, with a great smokey flavour from the charring on the outside yet was still juicy and moist inside. The garlic mayo was delicious too, my only complaint is that there really wasn’t enough of it. 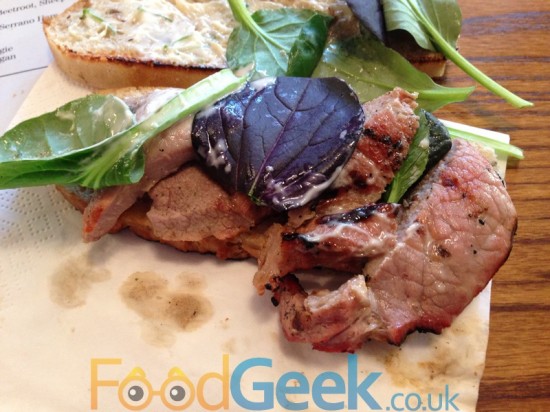 From the English countryside we were heading to Spain with ‘Tuna Tartar & Avocado Puree’, I’d actually been chatting about this dish with one of Roaming Pinchos guys on Twitter just a few days earlier and thought it sounded amazing. It didn’t disappoint!

Tuna and avocado are two of my favourite things but I honestly can’t think of a time when I’ve eaten them together until now! I certainly will be doing in future, it was a revelation! So fresh & light, absolutely perfect for a hot summers day. 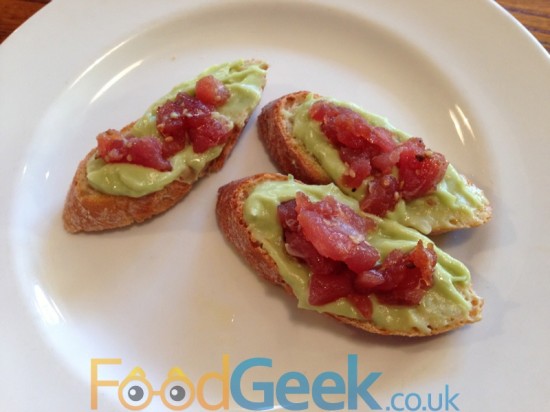 I was very grateful for the free food but there was no way I’d finished eating, not with more exciting dishes left to taste. I have no problem paying for great food so went back for more. Firstly back to Roaming Pinchos for ‘Pickled Beetroot, Sheeps Curd & Honey’ which was another summery dish full of flavour. Perhaps a touch too sweet for my taste but very enjoyable all the same. The little fish in the photo are the boquerones from another dish: ‘Boquerones in Cava Vinegar’ which were also new to me and another revelation that i’ll be looking out for. Similar to sardines but with a more subtle taste they were so tasty I could have eaten a plateful of them and the Cava vinegar was the perfect accompaniment for them. 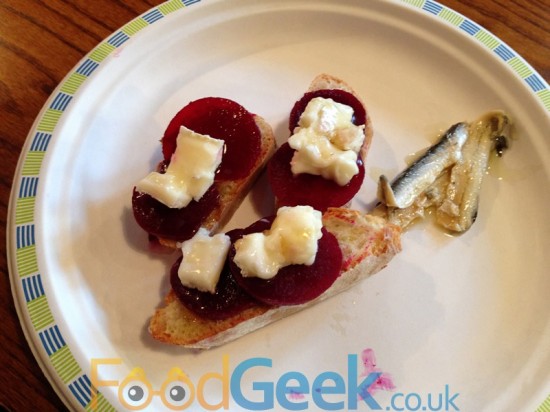 Margo & Rita had teased me earlier in the day with talk of a ‘Sweet Taco’ so I was delighted to see it included on the menu! I headed back to the big purple Venga bus to order a couple. It was my first ‘Sweet Taco’ so wasn’t sure what to expect, then my heart sank when I saw them top it with ‘squrity cream’ which I generally hate but oh my god, it was utterly devine. The soft taco was filled with warmed apple puree and salted caramel sauce, a sweet, sticky, warm, comforting and delicious combination which was then bettered by a generous sprinkling of cinnamon. Even the cream worked as it melted down from the warm apple and mixed with the other flavours. I will be attempting to recreate this at home very soon! One (very) minor complaint is that they’re pretty difficult to eat with the tiny wooden teaspoon provided. 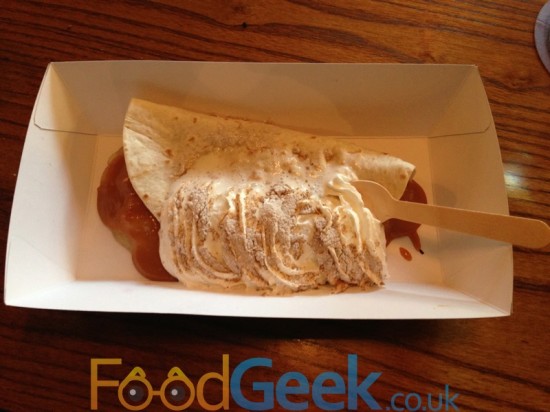 As well as the food we were given free drinks vouchers so that we could sample some of The Beagles own offerings, we tried a couple of the house beers and wines, all of which were good. I particularly enjoyed the Beagle Pale which had a lovely summer vibe and Mrs FG loved the House Rosé.

The cocktail menu caught our eye though, particularly the ‘Beagle Biffin for 2’ which was a combination of Somerset cider with one of my favourite spirits Calvados, elderflower & soda and finished with lime, cucumber & mint. Of course this wasn’t included with the free vouchers but I very happily paid for one. It took a while to make but it was worth the wait and the price, although I couldn’t really pick up the calvados which was a shame it was still a brilliant combination of quality cider with interesting complimentary flavours. I was being introduced to so many new things and my mind is now full of ideas for cider based cocktails! 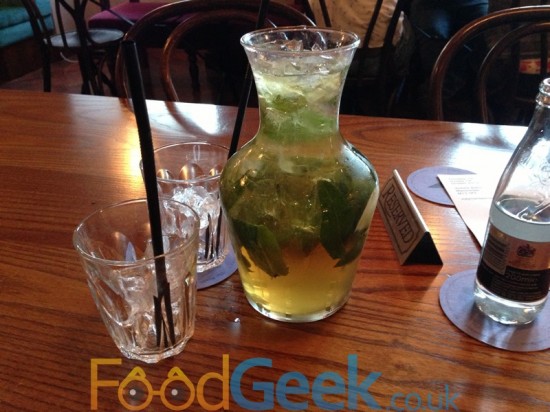 As you can probably tell I had an amazing time, of course I didn’t pay for all my food & drinks but I would have been more than happy to have done. Not only was everything I ate was brilliant in terms of cooking and flavour but these traders are offering exciting dishes that you just can’t get anywhere else, let alone in a pub. The Beagle’s drinks are great and there was an amazing vibe too. The people of Chorlton are very lucky to have such an exciting thing happening on their doorstep, i’ll definitely be back and if I lived a little closer would certainly be a regular.

Food services will be covered at The Beagle by an ever changing rota of Guerrilla Eats traders every Tuesday to Friday 5.30-9.30pm & Saturday & Sunday 12 noon-9.30pm. I highly recommend that you get down there!

Follow @FoodGeekUK
I’m pretty sure that I don’t actually have OCD and probably shouldn’t joke about it as I realise it’s a serious illness. I do have some slight ‘OCD like’ tendencies though such as needing to keep things organised, I’ve spent many hours arranging DVD and CD collections into the ‘right’ order and the same applies ...

Previous: Mishkins – A Kind Of Jewish Deli & My First Ever Steamed Burger
Next: Byron, Deansgate – ‘Proper Hamburgers’ Arrive In Manchester