Just like my previous post about Guerrilla Eats at The Beagle i’m defying my slight OCD tendencies to bring you this review from yesterday’s Byron opening before my backlog from last weekend. Only because it’s another current event, we’re definitely back to chronological order after this one or i’ll quite possibly be driven insane. 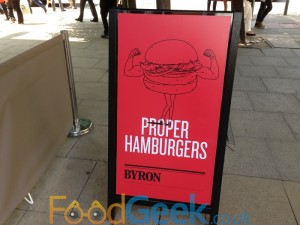 If you don’t know about Byron have a look at this post which I wrote after receiving the press release confirming Byron’s opening. It talks about the inspiration behind Byron and their focus on using good quality meat which is minced freshly each morning.

Byron Manchester finally opened on Deansgate (on the junction with John Dalton Street, where Pesto used to be) at 12pm yesterday. I arrived around 90minutes later to find the place absolutely rammed and any hopes of sitting outside to enjoy the gorgeous but rare Manchester sun instantly dashed. After a short wait a booth was available for us and we took our seats.

I liked most of the decor, it instantly reminded by of classic US burger joints but with a modern industrial twist. I’m not sure whether the renovation is behind schedule or they’re intentionally going for the unfinished look and taking ‘industrial’ a step too far. There are lots of open ceilings and exposed bits of wall with marker pen scribblings which felt a bit odd to me if it’s intended (though Blackburn Rovers fans will appreciate being reminded of a 4 – 0 victory over local rivals Burnley I’m sure!). 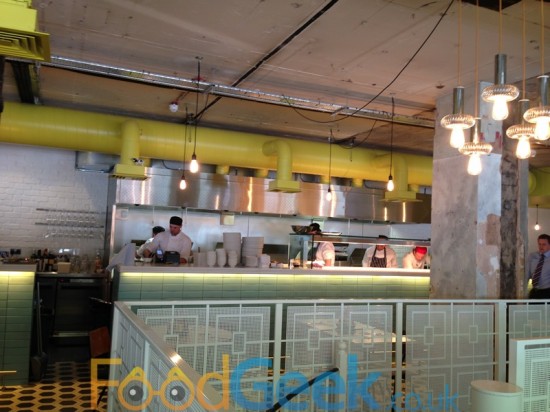 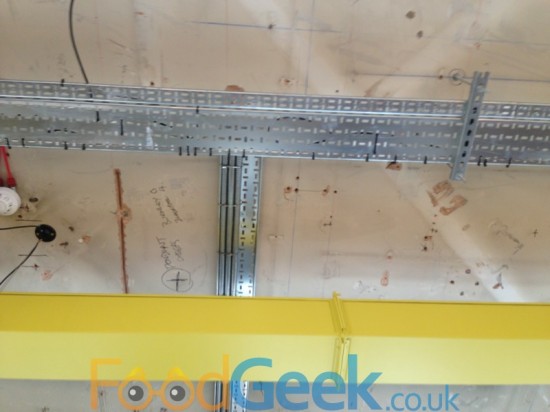 Ordering was easy, partly as the menu is fairly limited but mainly because i’d looked at it many times recently. Byron are clearly focusing on being a burger place as other than a couple of salads & sides that’s all they do. Predictably, I went for a ‘Chilli’ and almost as predictably Mrs FoodGeek went for a bacon topped ‘Byron’. We decided to try a ‘Classic’ too as well as a couple of sides and a ‘Byron’ dip.

The food arrived pretty quickly, especially considering it was their first service and the restaurant was completely full. I was impressed with the clean looking burgers, they had a simple elegance about them, particularly the ‘Classic’ which was dressed with just lettuce, tomato, red onion and mayonnaise.

The meat patty was tasty and cooked really well, the menu states that they’re all cooked ‘Medium’ and pink unless requested otherwise. The bun was OK but overall I found it a bit dull for my tastes. Though it was vastly improved with the addition of mustard and i’m sure there is a market for such a plain burger. 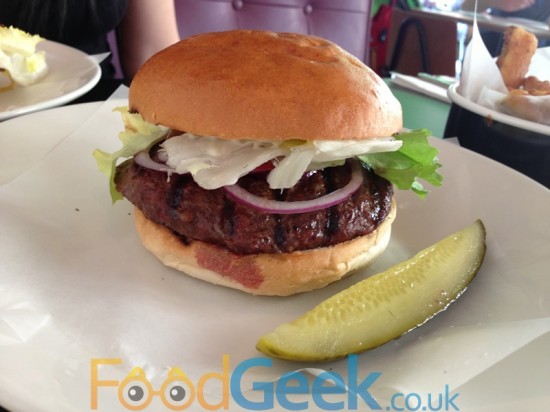 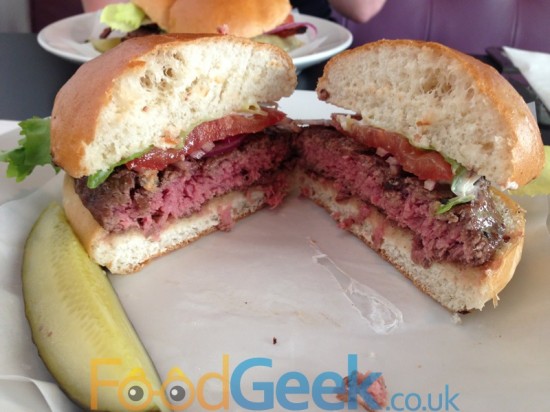 Mrs FGs ‘Byron’ burger was a big improvement thanks to the delicious and plentiful bacon and slice of mature Cheddar which gave it another dimension. Unfortunately the tomato was a little soggy though. The patty was slightly more cooked but still just about ‘Medium’. 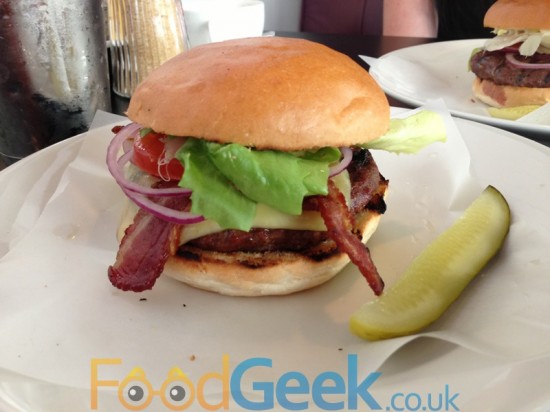 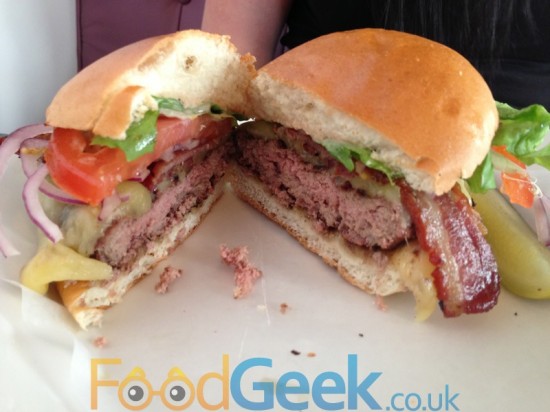 My ‘Chilli’ burger was the best by far. Topped with green chilli, American cheese, iceberg and chipotle mayonnaise. It did have a nice kick but i’d have liked a little more green chilli on there, I will be asking for it next time. The chipotle mayo was nice but didn’t pack enough punch for me so I added some extra chilli sauce.

I’d asked for this burger ‘Medium Rare’ and it was absolutely perfectly cooked. 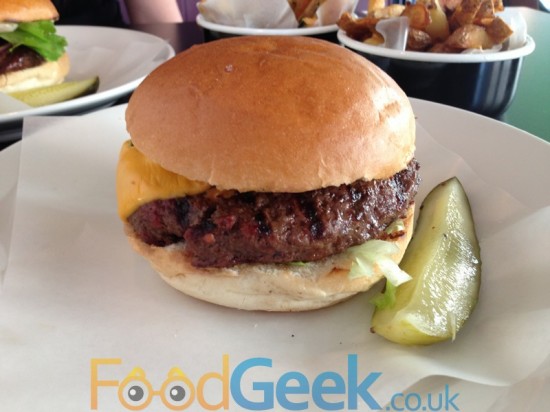 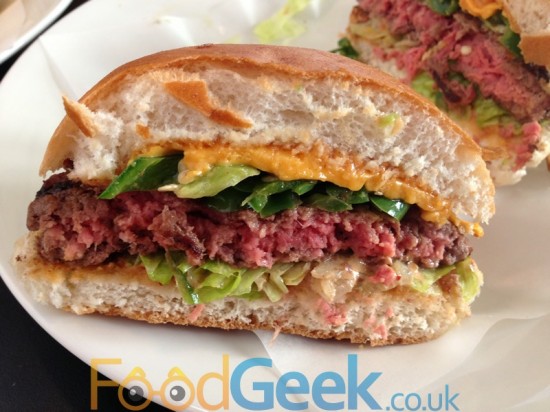 Sides at Byron are limited and simple. We went for ‘Homemade Skin-On Chips’ and ‘Courgette Fries’ with a ‘Byron’ sauce for dipping.

The Skin On Chips were decent, crispy and well seasoned. The Courgette fries were even better and one of the highlights of the day, really well seasoned and crispy exterior with tasty, warm courgette bursting with juice and flavour inside. The Byron sauce, their take on hamburger sauce was enjoyable and perfect for dunking both sets of fries into. 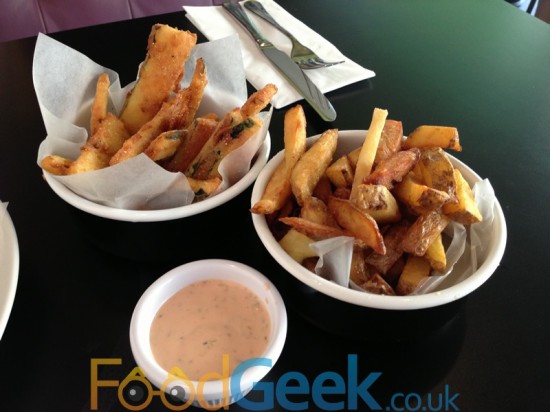 Unfortunately, we didn’t have time for dessert due to arriving late after finding it difficult to leave the Mark Addy beer garden that we’d popped into for ‘a quick drink on the way’. This was a shame as there are some fun sounding desserts such as ‘Banana Split’ on the regular website menu and we also spotted ‘Eton Mess’, a favourite of Mrs FG on the restaurant menu. The ciders in the sun had been worth it though.

I did almost have a dessert actually, in the form of an ‘Oreo Milkshake’. I’m a big fan of Oreo’s and they pretty much make anything taste good but this was out of this world amazing! I’ve had a few Oreo milkshakes in my time too but this was by far the best.

Served in a traditional metal shaker, thick, creamy, packed with ice cream and most importantly full of Oreo flavour and loads of lovely bits of cookie. 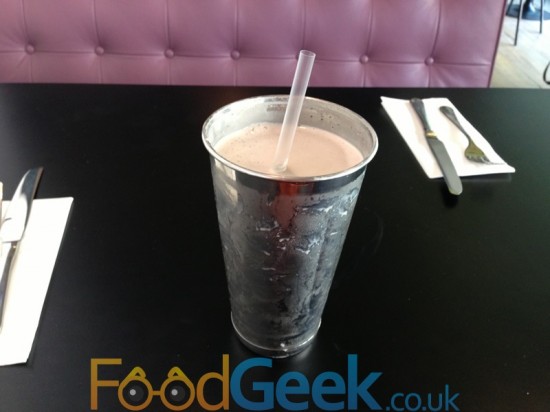 I was impressed by the service which was very efficient considering the staff are new and again how busy it was.

Overall I think Byron is a good addition to Manchester, the milkshake and courgette fries were really very special but although I enjoyed them I don’t think the burgers are anywhere near as good as SoLita and even though they annoy me the same goes for Almost Famous too. Byron are however a bit cheaper and on the opposite side of town where there are far fewer decent options as well as being primarily a burger bar. Whereas I consider SoLita to be a more refined grill restaurant with lots more to offer than just burgers. I’d much rather eat at Byron than a McDonalds or even a Gourmet Burger though.

I probably wouldn’t go out of my way to make a special trip to Byron again but i’ll definitely be back next time I’m in the area and want a fast, decent burger (and another Oreo milkshake of course).

Follow @FoodGeekUK
Just like my previous post about Guerrilla Eats at The Beagle i’m defying my slight OCD tendencies to bring you this review from yesterday’s Byron opening before my backlog from last weekend. Only because it’s another current event, we’re definitely back to chronological order after this one or i’ll quite possibly be driven insane. If ...