Beer & Food Pairing @ Taps, Manchester – It Can’t Be As Bad As Last Time, Can It?

There was nothing romantic about Valentine’s Day 2012 for me. The date of my worst ever experience as a food blogger at Taps in Manchester’s Great Northern. I swore I’d never return; something I stuck to for two and a half years, even when asked directly by the restaurant. 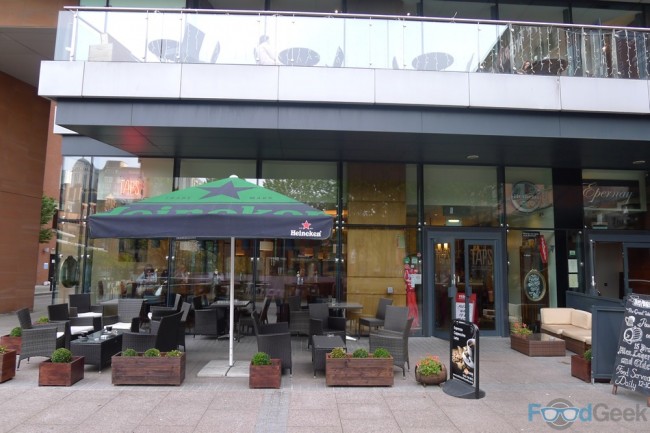 When I did go back last month it wasn’t because I was asked – they didn’t know I was going – it was for their ‘Beer & Food Pairing’ menu. Something I’ve become interested in over the last couple of years and even run my own beer pairing events now. 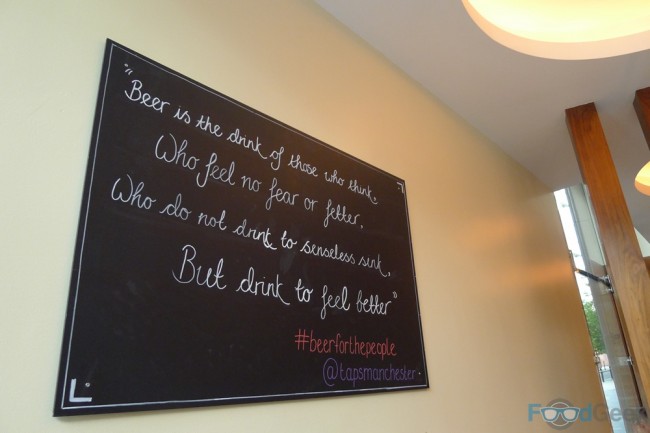 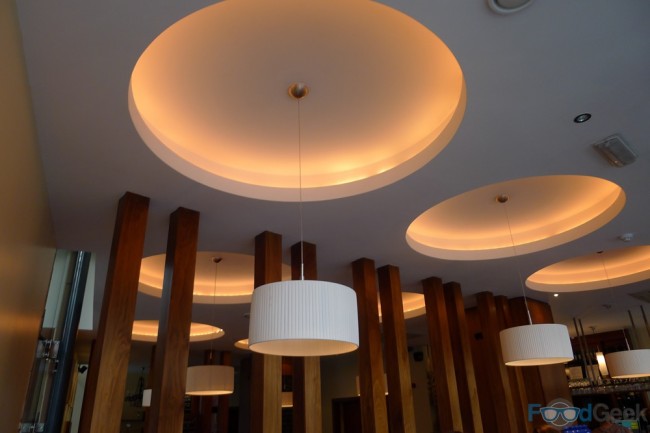 I’d love to tell you that just like the management promised they’ve ‘completely changed’ and I had an amazing time. I didn’t.

To be fair it was better than last time, but then, it could hardly be any worse. There were still issues though including ridiculously slow service, just like last time. This was despite us receiving our first drinks within minutes of sitting down. Surely a good sign? 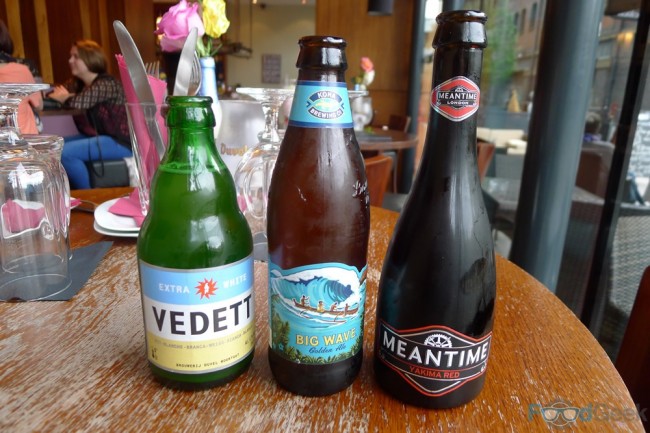 Well no. You see this was a ‘Beer & Food Pairing’ event. Not only did we receive three beers at once which wasn’t ideal, it was 43 long minutes until we had any food to pair them with. It was only because I was uncharacteristically restrained that I got to try the two together at all. 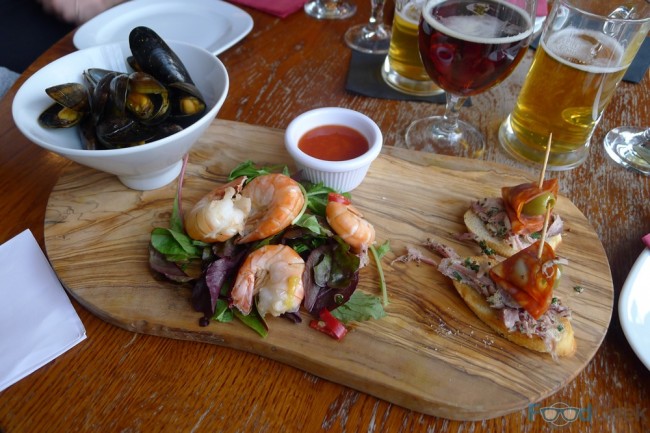 Despite the wait things picked up when the food finally arrived. Although the first beer, ‘Vedett – Extra White’ is neither my favourite beer nor style, the pairing was excellent. The slight spiciness along with the citrus and coriander notes of the Belgian style wheat beer were a natural partner for the first dish; ‘Moules Bruges’, mussels cooked in a light and fragrant curry sauce. 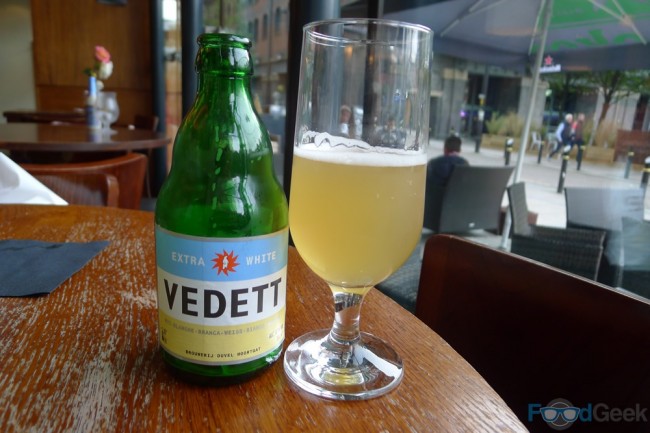 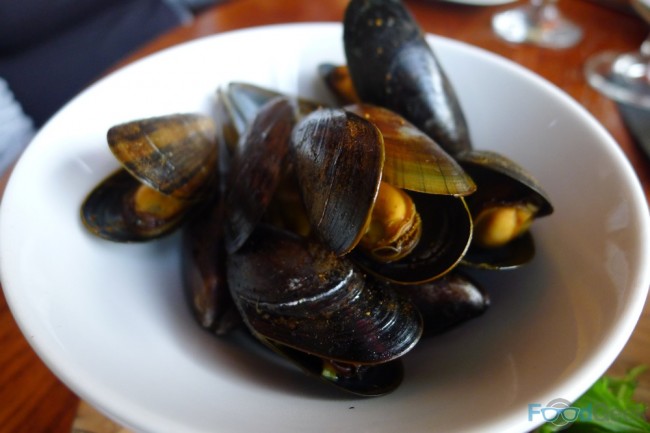 The second pairing also worked very well and I liked the beer too. You can’t miss Kona in Manchester these days. It’s getting a bit boring but ‘Big Wave’ is definitely one of their more enjoyable beers. Coming from Hawaii and using combinations of hops to give tropical fruit aromas and flavours it was a perfect match for the grilled king prawns; the tropical flavours melded beautifully with the pineapple in the sauce and balanced the chilli heat. 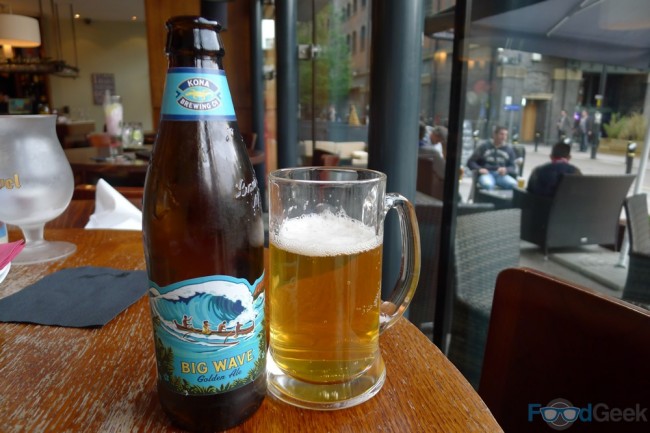 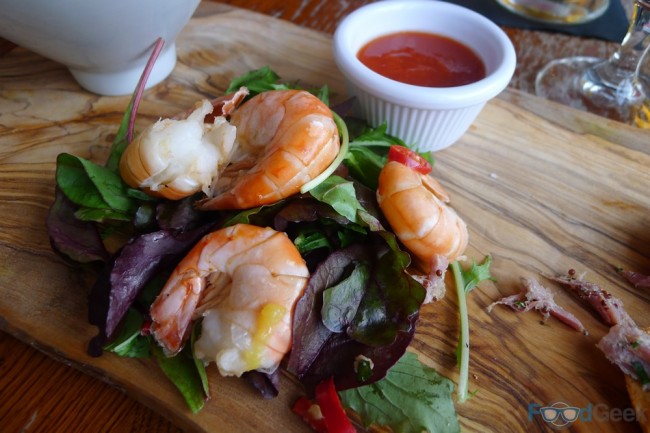 The next dish was described as a ‘Charcuterie Board’, perhaps charcuterie bite would’ve been more appropriate. A small slice of toast topped with a little ham hock terrine, a slice of chorizo and an olive does not make a board in my eyes. It wasn’t particularly good quality produce either but it did work really well with the beer; Meantime – Yakima Red, a hoppy red ale perfectly suited for pairing with charcuterie and ham hock. 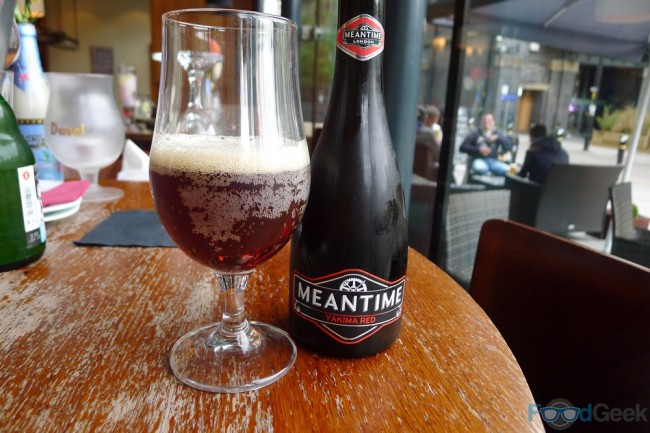 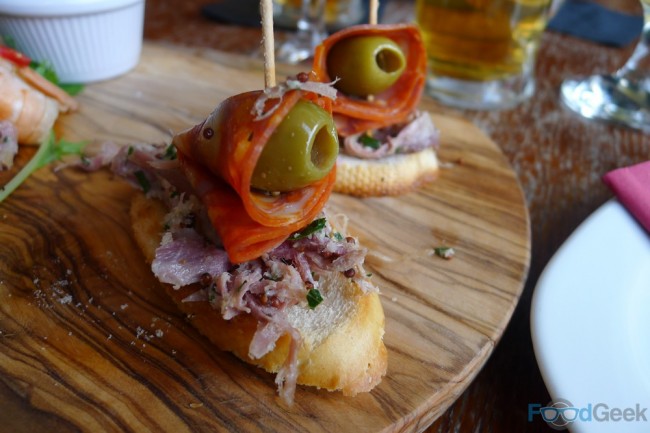 You may remember the original concept of Taps was that you had beer pumps on your table to pour your own drinks from. Presumably somebody realised it doesn’t really work when each table had different beers but you had no say in where you sat. I was pleased to see they’d been removed. They’ve been replaced with a ‘Beer Wall’ where you can go to still pull your own pints if that kind of thing appeals to you. 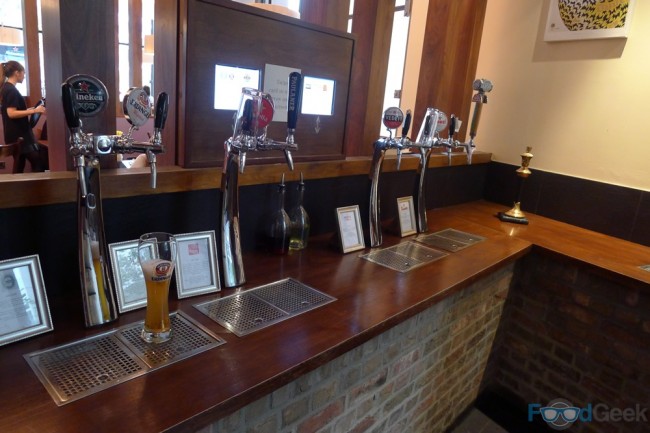 The beers for our final three pairings were from the taps, but I’m not interested in playing barman so had them brought over. We didn’t have to wait quite as long for the food to arrive this time but it was still a good 20 minutes. 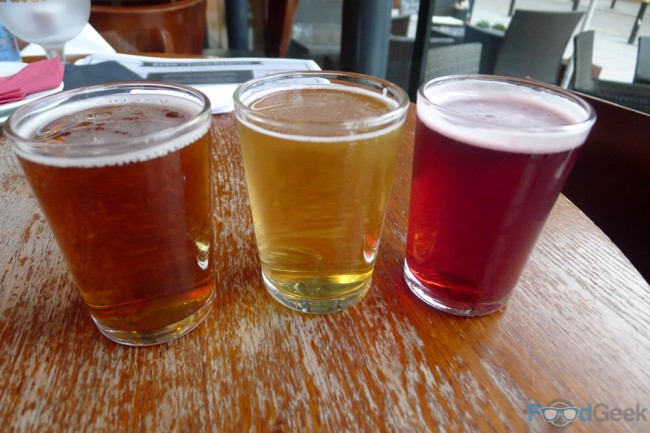 It’s worth remembering that we’d been in Taps for well over an hour by this point and had only eaten three tiny dishes after a 45-minute wait. I already found that unacceptable as they weren’t particularly busy but it was all the more baffling when the board with the next three dishes arrived containing popcorn and pork scratchings. Surely it would make sense to send them out first since they require no cooking? 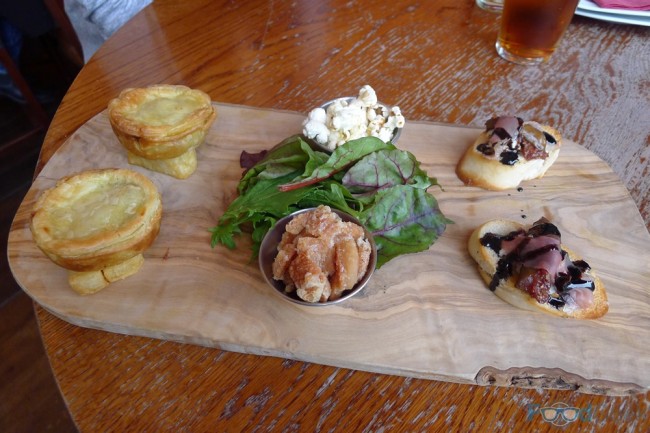 Particularly given they were paired with the lightest and least flavoursome beer; Warsteiner, a classic German pilsner.

The pork crackling was lovely and crispy but slightly too salty. The popcorn was fine but didn’t taste of bacon or particularly smoky as promised. But you can’t really go wrong with salty bar snacks and lager. Again it’s a combination that works, it would’ve been even better as the first beer though. 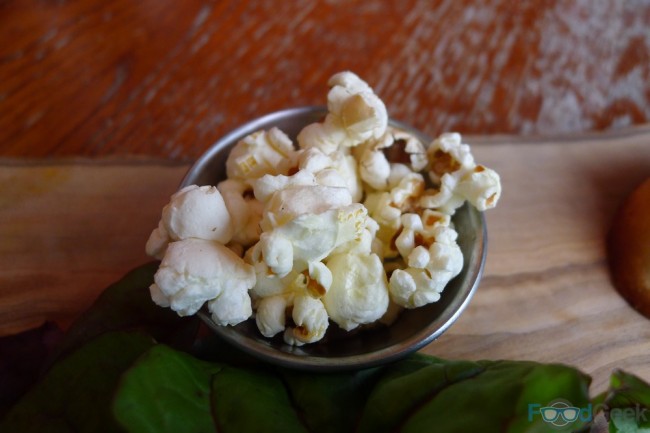 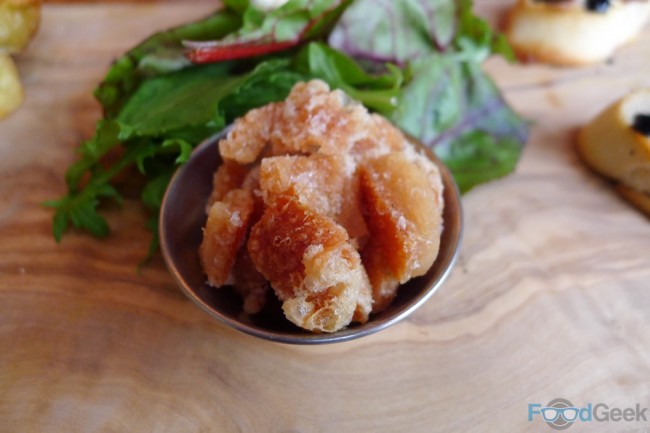 The only food I really didn’t like was the ‘Beef, Red Wine & Stilton Pie with Fat Chips’. I thought they’d forgotten the chips at first but eventually found a measly two hidden under each miniature pie. I understand this is a tasting menu and the main purpose is the food and beer combinations but come on, two chips? Surely they could’ve stretched to three or five? If nothing else it’d be a more secure base for the pie to sit on!

Worse however was that the pie wasn’t very good. Not helped by the fact they were almost certainly reheated in a microwave, leading to soggy pastry and a molten hot filling. But it didn’t taste very good either and I couldn’t detect any Stilton at all.

To compound the misery for this particular course they’d gone and changed the pairing from a fairly average but quite nice beer – 13 Guns by Thwaites brewery under their Crafty Dan brand – to an underwhelming, below average beer that I don’t particularly like. ‘DNA New World IPA’ is a collaboration between the usually solid US craft brewer Dogfish Head and UK brewery Wells & Young. The server insisted that it’d been changed as it’s a ‘better beer’ but I strongly disagree. It’s a weak American IPA style beer that has more in common with a traditional British bitter.

As for the pairing; well they did work together, but neither are very good. 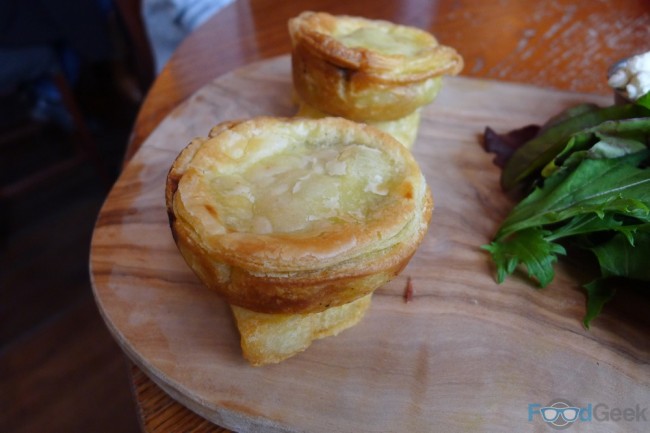 The final pairing saw a ‘Goats Cheese Bruschetta with a Balsamic Glaze’ paired with Liefmans Fruitesse, a Belgian fruit beer. The pairing did work, in theory. The flavours of the chutney and balsamic glaze did meld perfectly with the berry flavour of the beer but for me they were both too sweet individually and putting them together just boosted the sweetness. I’d have paired it with a sharp beer to counter the sweetness. 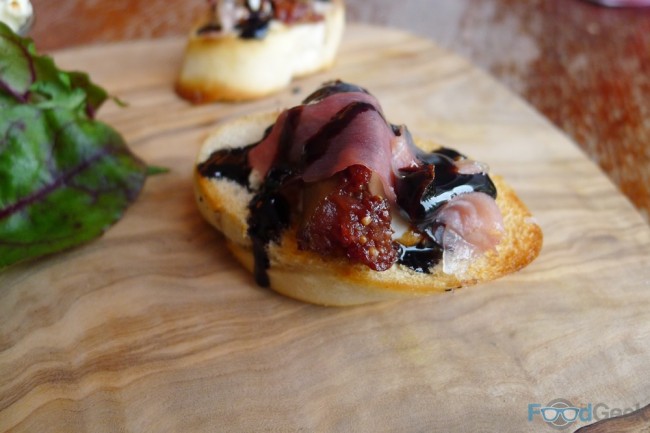 Surprisingly, I actually enjoyed my time at Taps overall, particularly given how bad it was last time.  The food wasn’t amazing quality, some of it was pretty average in fact. But there was nothing horrendous like last time and I was much more interested in the beer pairings which worked and were generally enjoyable.

It’s amazing that years later there are still exactly the same issues with the painfully slow service though. Sending out the first three beers immediately and then making us wait for 45 minutes before we received any food, when half the dishes required no cooking is just crazy. Had they sent the pilsner, pork scratchings and popcorn while we were waiting it would’ve been a totally different experience. It’s worth mentioning that there was no apology at any point for the huge wait either.

I said I was confident I wouldn’t return after last time, I didn’t stick to it then so I won’t make any more bold claims. It’s fair to say that despite this experience being much more positive I’m not in any rush to go back. Especially when BrewDog is just across the road with far superior beer and bigger, better food.

Follow @FoodGeekUK
There was nothing romantic about Valentine’s Day 2012 for me. The date of my worst ever experience as a food blogger at Taps in Manchester’s Great Northern. I swore I’d never return; something I stuck to for two and a half years, even when asked directly by the restaurant. When I did go back last month it ...