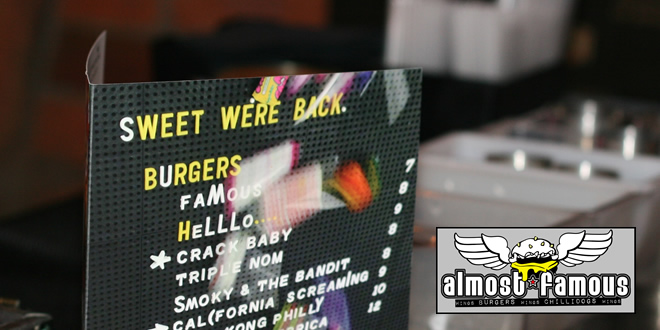 Perhaps surprisingly, I’d only been to Almost Famous once until recently. This for various reasons including; being a bit of a SoLita fan boy, not liking to queue and finding their early marketing more than a little tedious. On that single visit in early 2013 the food didn’t blow me away as I’d expected but equally, I wasn’t annoyed by any of the stuff I thought I would be either, actually I really enjoyed it and fully intended to return. But before I had chance they only went and burnt the place down!

They opened a big, shiny new place in the Great Northern Tower of course, but I never really fancied that much. The new venture seemed to have a positive effect on their marketing at least; by positive I mean they totally toned it down. Even boss Beau Myers – who I’m sure won’t mind me saying I found rather annoying previously – has gotten a lot less ‘edgy’ these days. We happen to have quite a few friends in common too so he can’t be that bad can he?

One of these mutual friends, Iain, aka The Drunken Butcher had been badgering me to go all year, we almost made it to the Great Northern a few times but when the Northern Quarter joint reopened in June it seemed the perfect opportunity. Somewhat worryingly Beau promised to ‘sort us right out’.

We met head chef Leon Frey at Apotheca where he professionally declined several drinks (would that’ve happened in the old days?), after a good chat he left to prepare our food, telling us “let the guy on the door know you’re with me and come straight up”. I’m not gonna lie, I couldn’t wait to jump the queue, Jay-Z style.

So you can imagine my disappointment upon arriving to find no bloody queue. Here’s a tip; if you want to go to Almost Famous and not queue, go during an England World Cup match.

Anyway, it was great to finally walk up those now famous stairs again. I was relived to see the ‘No Photography’ sign on the door has been replaced too, my big camera was getting a bit uncomfortable stuffed up my shirt.

Inside didn’t look massively different to how I remembered it, but then it was 18 months ago. I liked the new artwork though including one of good old Jamie & Gordon taking Ronald off, presumably do bad things to him. 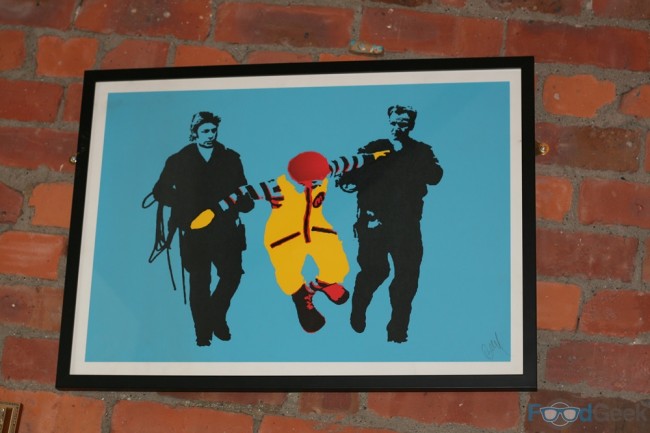 Once seated I naively ordered a pint of Brooklyn which I was enjoying sensibly before the madness began. First a gorgeous – but ridiculously strong – bourbon based cocktail was brought to the table, quickly followed by many shots of whiskey and later tequila.

We ate food too but you probably don’t need me to tell you about that do you? If there’s a restaurant in Manchester that doesn’t need ‘reviewing’ it’s Almost Famous.

Needless to say it was all amazing though, I know it was made by their head chef while it was quiet but even so, it blew me away. My ‘Hong Kong Philly’ was just stunning; quality meat topped with cheese, teriyaki cheese steak, jalapeños, grilled onions, BBQ fried onions, lemon herb mayo & my favourite ever condiment, Sriracha. I’ve eaten a lot of burgers in the last two years but this was right up there with the best. 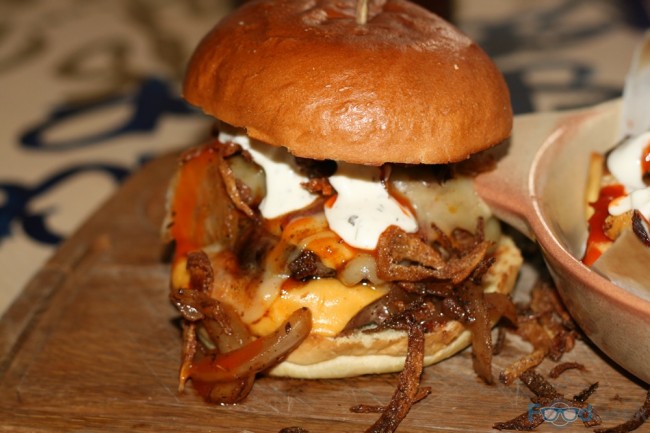 ‘Morning After Fries’ were just as good; winning fries – a combination of skin on potato and sweet potato – drowned in bleu cheese sauce, hot sauce then scattered with chorizo and jalapeños. Not for the faint hearted but perfect for chilli freaks like me.

If you’re still yet to try their ‘Bacon Bacon Fries’ topped with Baconaise (yep, that’s bacon-mayonaise!) and crispy bacon bits you need to have a word with yourself. ‘Smokey & The Bandit’ is the biggest seller and rightly so; JD candied bacon, BBQ fried onions, chillies, chipotle and more baconaise make for a pretty special burger. 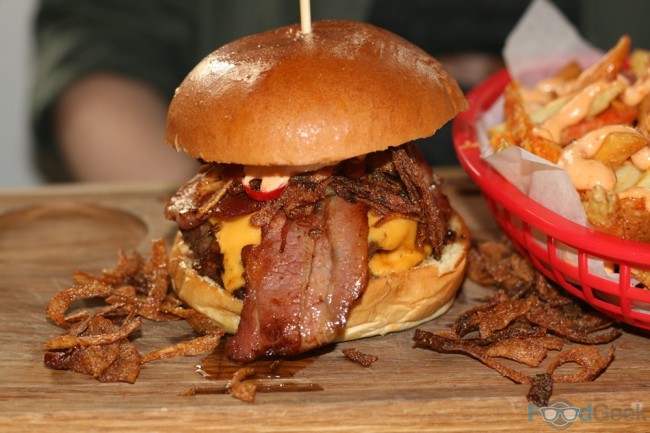 Finally, ‘Chorittos’, a currently off menu creation sent out by Leon; fries topped with chorizo oil, chorizo bits and Baconnaise amongst other things. These were so good, hopefully they’ll be on a regular menu soon.

We didn’t bother with desserts, does anybody after food like that? In fact do they even do them? I know they do ‘Boozy Milkshakes’ which look amazing but we stuck to the hard stuff, well it would’ve been rude to say no. 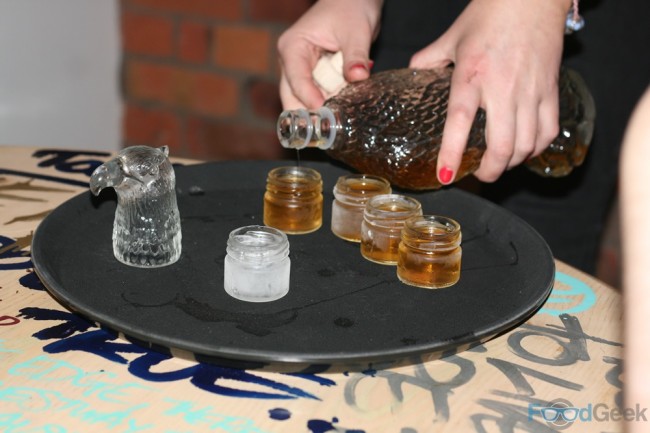 I can’t quite put into words how much I enjoyed Almost Famous, it definitely helped that there was no queue, we were there as guests and plied with alcohol but for me it’s always all about the food. Everything you’ve heard about them is true, if you haven’t been yet, go now!

I’ll absolutely be back soon and more regularly too, sadly Leon is off to open Almost Famous in Leeds so I just hope his replacement is as good.

Disclaimer: Unbeknown to us at the time, we weren’t asked to pay for our food & drinks. We didn’t find out until the end, assuming that the drinks thrown at us would probably be free but fully expecting to pay for our food (if we’d known we’d obviously have ordered WAY more). Like usual this has no effect on my opinions, nor was that their intentions. If there’s one place that doesn’t need to buy positivity, it’s Almost Famous. Thanks Beau & Leon.

Previous Kayal, Leicester – Is This REALLY The Best Restaurant In Leicester?
Next Viet Shack, Manchester Arndale – The Best Value Lunch In Town?