As soon as I noticed how close we were to Spain I just had to pay a visit. I love Ibiza and Barcelona is one of my favourite places in the world but I haven’t been to southern Spain since a package holiday many years ago as a small child. Looking at a map I picked out Seville as the best place within a reasonable driving time, being just over 2 hours away. The more I read about it the more  I was looking forward to seeing the city full of oranges where the streets smell of orange blossom! Of course I needed to find somewhere great to eat as well and ‘Bodega Dos de Mayo’ sounded perfect. It’s been featured in the Michelin guide for the last few years and has won many awards including ‘Best Tapas In Andalucia’, I love tapas, sold! The first thing I noticed about Seville was the heat, 44º is very hot, even after spending the last week in Portugal at 30º+ every day. We parked only 1 mile away from Bodega Dos de Mayo but it was a tough walk in that heat.

We finally arrived very hot, hungry and thirsty. After taking a look at the menu I realised that it could be a while before we had anything to eat. Not only was it very big but it was also exclusively in Spanish. We’d been spoilt in Portugal where almost every menu had English translations but not here and my Spanish knowledge doesn’t extend to exotic ingredients unfortunately. I decided to go inside and see if I could find either an English menu or somebody that spoke English. What I did find was a crazy busy bar with at least 10 staff rushing around and shouting behind it, platters full of amazing looking food everywhere and people eating standing up! I picked the kindest looking barman and in my best broken Spanish tried to ask if he spoke English, his answer “a lit-tle”. PHEW! I went on to explain (in English) that I don’t understand much Spanish, especially menus but that we’re very hungry and like to eat most things so could he please recommend some dishes. He seemed to understand and was happy to do so but his little English didn’t quite stretch to translating menus either so he ended up running up and down the bar holding up various dishes for me to say yes or no to. I said yes to pretty much everything. He then took my name, gave me 2 beers and told me to sit down and wait until my name is announced over the speaker system.

We sat outside in the now 45º heat and after a short wait my name was shouted over the speaker, I went back in to find my barman holding out my first dish, Octopus. I’d enjoyed an octopus salad a few days earlier but this was on another level. By far the best octopus i’ve ever tasted, perfectly cooked, soft and juicy and topped with smoked paprika. Stunning! 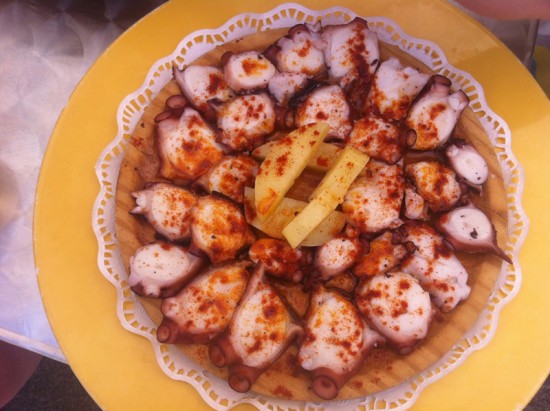 Next was a Spanish Tortilla, there were 2 types behind the bar one was full of roasted vegetables and the other plain. I had tried to ask for the vegetable version but he didn’t seem to understand as I received the plain one. Though there was nothing plain about it, it was amazing, still warm and despite seemingly only containing containing 3 main ingredients of egg, onion and potato it tasted incredible. Definitely the best tortilla i’ve ever had. 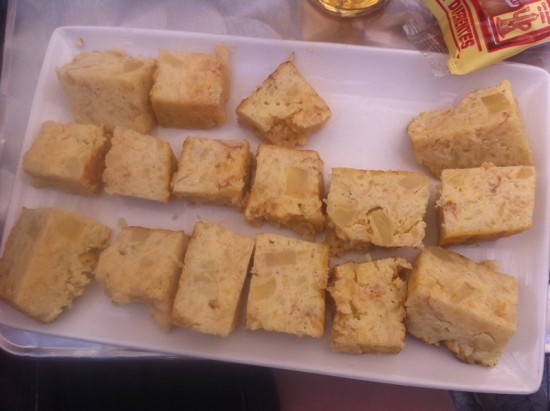 It wasn’t long before I heard my name again and went inside to collect a plate of juicy looking prawns. I’ve eaten many prawns over the last few days, all had been good and these were too. They were incredibly sweet and delicious. 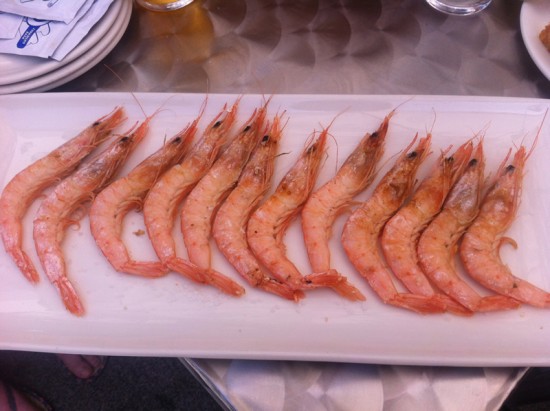 My running to the bar was over as the final 2 dishes were brought to us by a barman. Presumably they didn’t trust me to carry the HUGE kebabs dangling down from giant metal hangers. We got 2, 1 fish and 1 meat. The fish kebab contained peppers, onions, prawns and giant chunks of meaty white fish, monkfish I believe. They all had a loverly charring on the outside from being cooked on a BBQ or grill and tasted great, especially the fish. 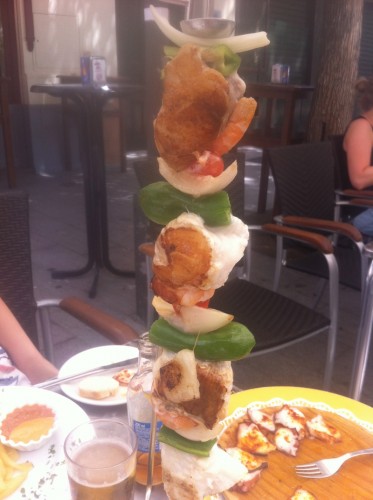 The meat kebab was even better, the same pepper and onion but this time replacing the fish and prawns were chorizo sausages and huge chunks of steak. The chorizo was spicy, smokey and tasted incredible, definitely the best i’d ever had! The steak was charred on the outside but still pink and juicy on the inside and the oil from the chorizo above had dripped down and flavoured the outside, so so good. The kebabs were served with chips which were quite good and with some paprika dips which were very good. We somehow managed to finish everything but were so full that we couldn’t actually move. 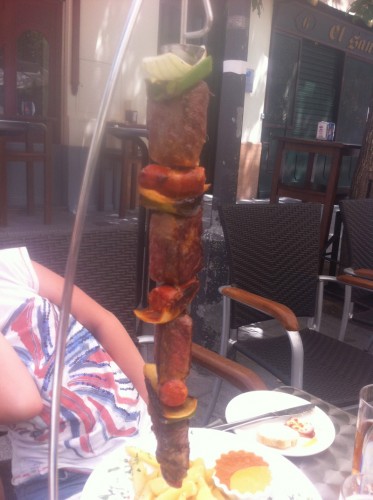 I was quite upset when I realised there was no way we’d be able to try any desserts, there was literally no way I could manage even another bite. It’s a shame as i’ve sure they would have been stunning but I didn’t regret eating everything though as every single mouthful was a delight. Bodega Dos de Mayo is a very special place, the staff made me feel so welcome and were incredibly helpful despite the language barriers. They are clearly not used to dealing with tourists but did there best and the food was simply amazing. I thought i’d had good tapas before, in Barcelona and even in England but it was not even close to the quality here. Bodega Dos de Mayo is also really good value, I will definitely make sure I go back someday but I think i’ll make an effort to learn some more Spanish first!

Follow @FoodGeekUK
As soon as I noticed how close we were to Spain I just had to pay a visit. I love Ibiza and Barcelona is one of my favourite places in the world but I haven’t been to southern Spain since a package holiday many years ago as a small child. Looking at a map I ...