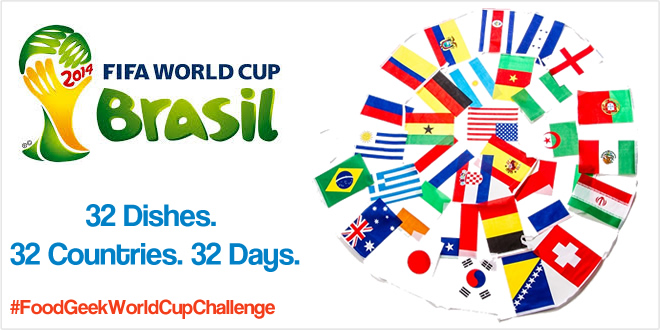 Before the World Cup started I had what at the time seemed like a great idea; to cook a dish from every country competing before the end of the tournament. 32 dishes from 32 countries in 32 days. Sounds easy right?

It turned out to be more of a challenge than I’d anticipated, I didn’t take into account how often I eat out, I didn’t have the opportunity to do one dish per day so ended up doubling up several times.

There were days when I really couldn’t be bothered making anything special but had to in order to keep on track. I’m glad I stuck to it though, I finished and completed the challenge in time – just one hour before the final started! Ending with finalists and favourites Germany, as if it was planned all along. I had a lot of fun along the way too and made some great dishes that I wouldn’t know about otherwise, plus I discovered some amazing new ingredients such as orange blossom water, dried limes and sweet potato noodles.

Besides the challenge and foodie aspect it was also an attempt to get my kids interested in the World Cup and learning about the countries involved. It seemed to work, my 6 year old in particular now has a great knowledge of flags (although his cutting skills leave a lot to be desired as you may notice in a couple of the photos).

In wraps the first time…

But liked them so much we made them again the next day and put them in pittas.

English Picnic: Including sandwiches, asparagus tart, cherry tomato tart, cheese & oatcakes, sausages and cake. We ended up eating it indoors though as it rained (of course).

Iranian Vegetable Stew: An Ottolenghi recipe, made with with dried limes & barberries.

Peri-Peri chicken served with sweet potato mash. ‘Algarve Salad’ which we ate everywhere on holiday a couple of years ago but couldn’t find a recipe for so created from memory. Pastéis de Nata (Portuguese Custard Tarts) for dessert.

I’m impressed with myself for sticking with it and doing all 32. I’ve enjoyed eating pretty much all of the dishes, favourites include the Iranian vegetable stew, Dutch Wentelteefjes and Ecuadorian Llapingauchos. I’ll definitely be making many of them again.

If there’s one thing that Manchester’s missing, it’s good barbeque food. Sure there’s Red’s; I was a fan …